While the island of Siargao in the province of Surigao del Norte has become a popular premier surfing destination in Southeast Asia, over the past few years the island’s image has gone beyond the surfing persona and has risen to be one of the top tourist destinations in North-Eastern Mindanao and in the Philippines.

Based on the data provided by the Department of Tourism in Caraga Region, as of January to June of 2017, the island brought in around 55, 735 local and foreign tourists. The number of visitors are expected to rise as the annual national and international surfing competition are deemed to bring in more tourist by September and well towards the months of November and December as the data of the second quarter of 2016 indicated around of 90,000 tourist arrivals.

About 90% of tourists are drawn into the town of General Luna where the famous surf site known as Cloud 9 is located. With the sudden rise of tourism in the island, the town itself has become more crowded in both visitors and the sudden rise of resorts and other business infrastructure. Other towns such as Dapa and del Carmen where the shipping ferry ports and domestic airport are located are also fast becoming a busy hub.

For those who want to escape the hustle and bustle of it all, just right around the corner, nestled on the northern part of the island is a surfing beach facing the Pacific Ocean, a coastal village known to locals as Pacifico in the town of San Isidro.

About an hour ride from the Dapa, the beach in Pacifico is blessed with white sand topped off with its clear blue-greenish waters. It’s coastline stretches for several kilometers, making it a plus for those who would love to get an early morning mix of swimming and walk along it’s stretching loose white sands especially during low tides.

During summer, the sunrise in Pacifico beach is a sight to behold with it’s radiant colors blazing out into the horizon unfortunately it’s a bit tricky to capture during the tropical monsoon season as thick dark rain clouds usually cover the horizon but you could still get a glimpse of the color emitted by the rising sun.

The colors radiated by the sunset from the other side of the island, also gives out that dramatic fell throughout its coastal waters, bringing out that nostalgic element for those who just want to sit down and enjoy nature’s wonder unfolding right before your eyes.

The beach also has a good surf site and locals’ living in the vicinity also give out surfing lessons to those interested to learn and get a grasp of what surfing is all about. Essentially, it’s a great breather for both surfing enthusiasts and those who just want a more peaceful and quitter place compared to the crowd in General Luna and the queue you need to have just to get your turn to surf the waves. 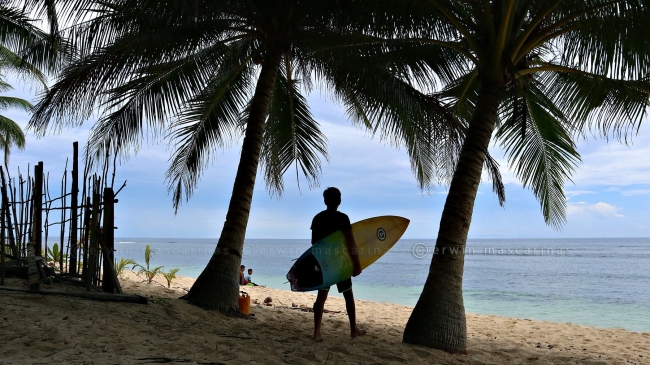 The only draw back for surfers is that the waves in Pacifico are not as consistent compare to that in General Luna. But for someone who just wants to be cut off and feel connected with nature, then Pacifico is a place you will surely feel rejuvenated.

The beach has about six local resorts or coastal inns where you can stay for a few days or more. The prices vary from 800 to 1,600 pesos a night with several small affordable eatery you can have your meal. There are also foreign-owned place where you can dine and eat but with a bit hefty price.

For backpackers, there is a spot where you can put up a tent or hammock and just feel the cool ocean breeze of the night, but just make sure you can ask from the locals, a quick house call in case toilet rush might be needed.

For me, my 2-days stay in Pacifico was just not enough and hopefully I will again get the chance to experience that side of the island and capture more photos of it’s natural beauty.

11 thoughts on “SIARGAO’S PACIFICO BEACH: an escape from the island’s tourism rush”